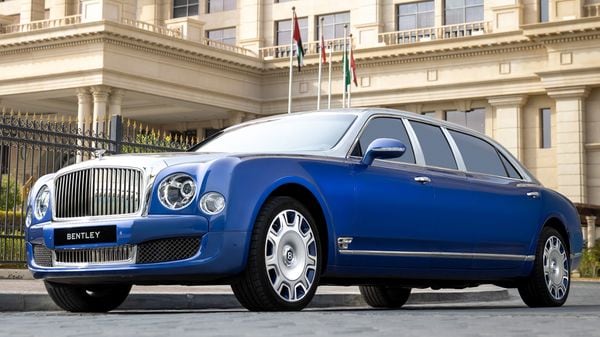 Created on a private order from a customer in the United Arab Emirates, these Bentley Mulsanne Grand Limousine models have never been used or registered.

Five models of Bentley’s Mulsanne Grand Limousine by Mulliner have gone on sale. Claimed as the luxury automaker’s most distinguished creation, what makes these five models unique is that they have never been registered or used. These limousines were handcrafted by the brand and shipped to the United Arab Emirates.

However, the buyer did not use or register these luxury cars.

The automaker claims that the Bentley Mulsanne Grand Limousine was designed and built entirely by hand. It comes with a 1000mm stretched body and a raised roof. The latter provides an additional 79mm of headroom at the rear of the car. One of these five models can be purchased through Bentley’s UAE retail partner, Bentley Emirates. The company will deliver anywhere in the world as required.

The car’s chassis and suspension were redesigned by Bentley. A 6¾-liter twin-turbo V8 engine can generate 505 hp and peak torque of 1,020 Nm. The car is also fitted with a custom heating, ventilation and air conditioning (HVAC) system designed and built by Bentley Mulliner , specifically for the Mulsanne Grand Limousine. With two discreet zones, each rear passenger can control their own microclimate without disturbing others.

The automaker claims that these five models have different specs and characteristics, which makes them as exclusive as possible. One comes in Silver Frost exterior paint over Moroccan Blue and is paired with Imperial Blue and Linen interior complemented by Burr Walnut veneer while the other in Damson paint over Black Crystal, has Twine leathers and veneer. Dark Stained Burr Walnut. One with an Onyx over Candy Red exterior featuring a Hotspur and Camel interior finished with an Olive Ash veneer shows the automaker’s vision of luxury.

While a model with Rubino Red bodywork over Light Gazelle and Fireglow and Twine leather interior paired with Burr Walnut veneer makes the model stand out, the latter with a single-tone Black Sapphire exterior and Dark-contrasted Imperial Blue and Camel interior Stained Burr Walnut veneer can leave potential customers confused. The automaker stopped production of the Mulsanne last year.