Tesla Model S stretch limo up for auction [Update: might be a scam]

What about all those extreme Tesla Model S modifications lately? After a fuel cell Model S and a new Model S station wagon, we now see a Model S stretch limo.

Update: We have received new information that leads us to believe that the vehicle is in worse condition than they lead us to believe. See end for update.

We first reported on the project over a year ago when Costa Mesa-based Big Limos began work on the Model S.

At the time, they posted a time-lapse video of a perfectly good Model S cut in half – cringe-worthy for Tesla enthusiasts.

Now we learn that the vehicle was built for an “advertising project” and they didn’t even need to finish it for the project.

They describe it as 90% complete and auction it as is on eBay.

It has already received 17 offers for a maximum offer of $28,820 at the time of writing:

They wrote in the description of the auction:

“The world’s first Tesla Model S 85 limousine. The 2015 chassis is an S85 which cost $100,000 for the vehicle not to mention the cost of the all-aluminum conversion to a limousine. This vehicle was built as a publicity project and is complete to 90% with only 150 miles from new The advertising project has been completed and the vehicle is now ready for completion Serious buyers and offers only.

Here are the pictures of the rare stretch limo electric vehicle:

How much would you pay for the vehicle? Let us know in the comment section below

I would need to see the inside and make sure it didn’t lose too much functionality.

It’s not yet clear how they managed to pull it off and given that they had to remove the battery before stretching the chassis and all the wiring, they probably have a bunch of issues to sort out in order to create this new wheelbase.

That’s why I’m not sure about their claim of “90% completion”. From the photos it looks like there is a good 10% work on the exterior alone.

But that said, I like the idea of ​​an all-electric limo. We’ve seen several luxury car services add more and more Tesla vehicles to their fleets. There’s no reason why stretch limos can’t also be fully electric.

Update: bidding has risen to over $42,000 since we posted, but now Jason Hughes, a prominent Tesla hacker and tinkerer, posted a warning about the vehicle:

I don’t know how to get this information to the right people, but the Tesla limo on eBay is a scam. The car does not drive. Wiring bundles were sawn off and not repaired. Spread the word somehow… 😑

We contacted Jason who said they had tried to help Big Limos with their project. He says they cut the wire harness during the stretch and were unable to get it to work afterwards.

Here is a photo that Jason sent us: 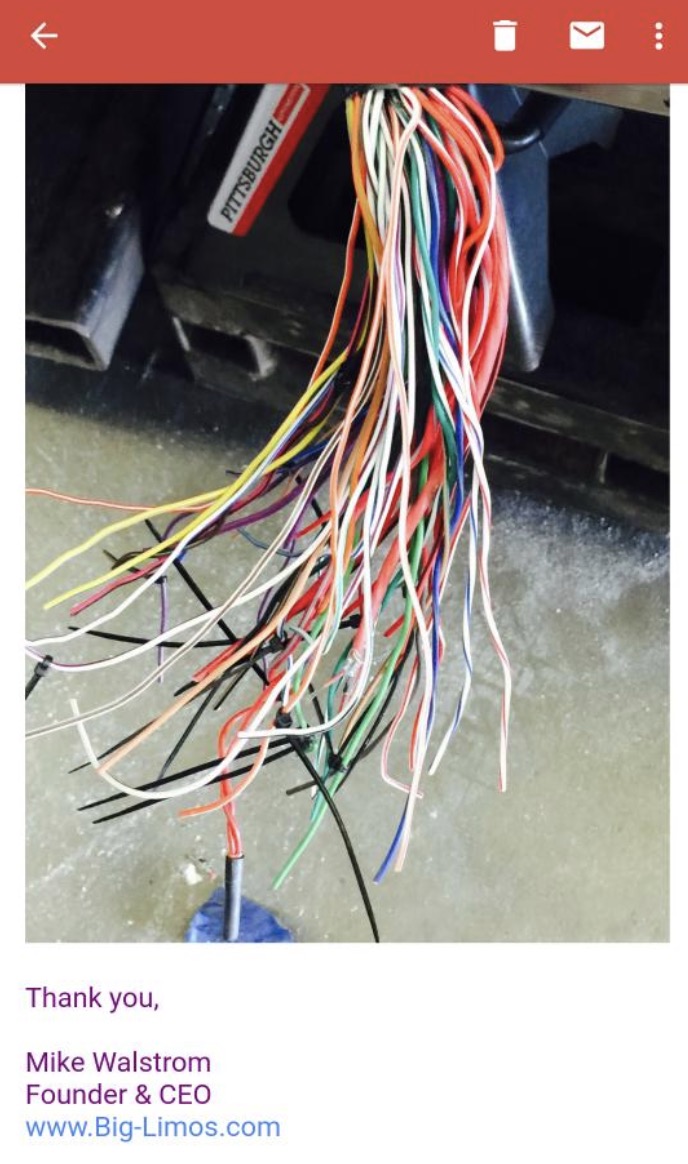 They apparently got tired of matching the color of the wire and re-energizing the vehicle, which caused more damage.

It looks like that 90% complete claim might be a very bullish way to look at it and it certainly isn’t worth the ~$42,000 people are betting on now.

We reached out to Big Limos’ Mike Walstrom for a comment on this claim.