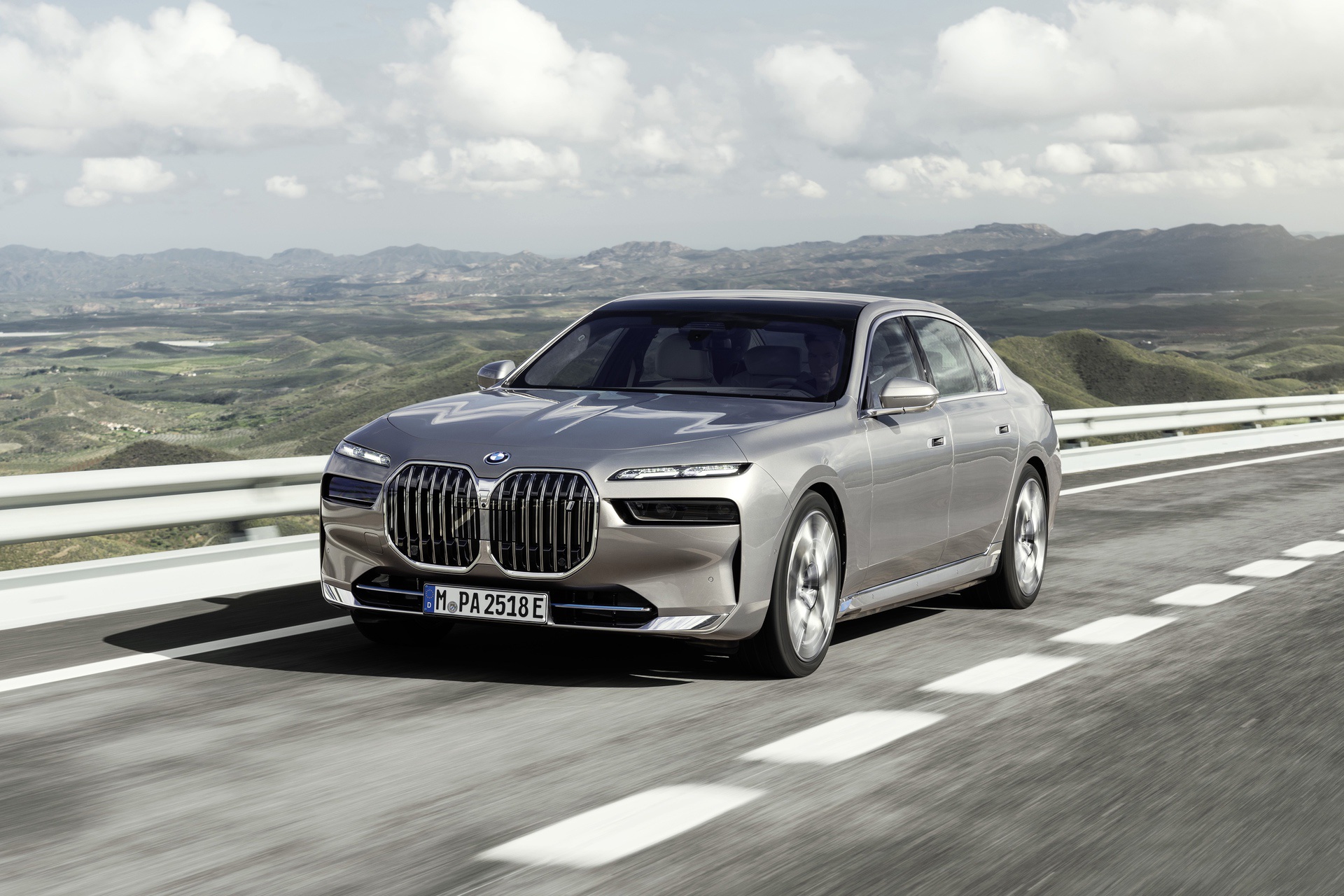 Alongside the all-new 7 Series, BMW has launched what is arguably the most significant version of its new flagship luxury car: the BMW i7. From the outside, it’s easy to tell that the i7 is just a 7-series with its engine thrown in and a few electric motors thrown in. Okay, that’s kind of it, actually, but that’s a crude way of putting it. In reality, the BMW i7 is the most technologically advanced and luxurious car the Bavarian brand has ever made and it’s the car BMW needs to take it into the future. 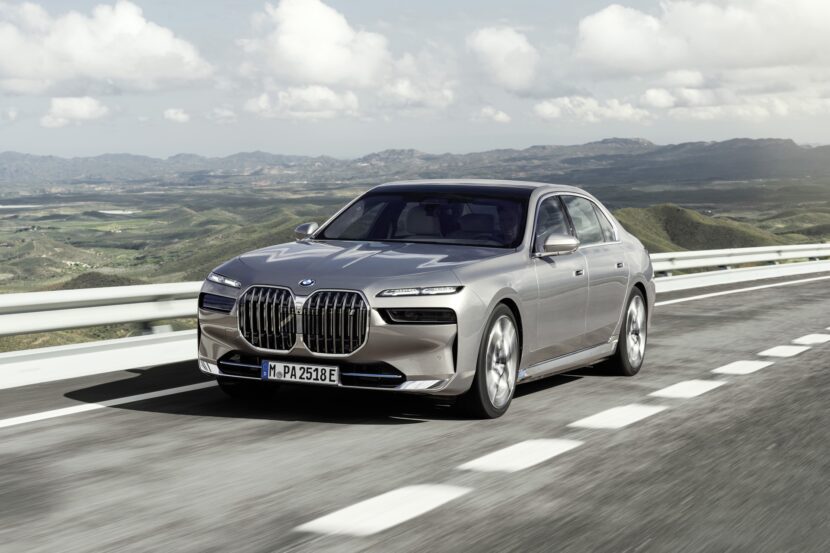 At the front, the BMW i7 and 7 Series have the same grille and the same new split headlights. Sure, some model variants have subtle variations, like the 760i’s dark trim around the grille, but they’re all the same, for the most part. The new split headlight design also looks great, giving the front end more visual verticality, reducing the visual impact of the large grille. Although it’s bigger and cheekier than the previous-gen 7 Series, this new front-end design is actually better looking and less offensive. 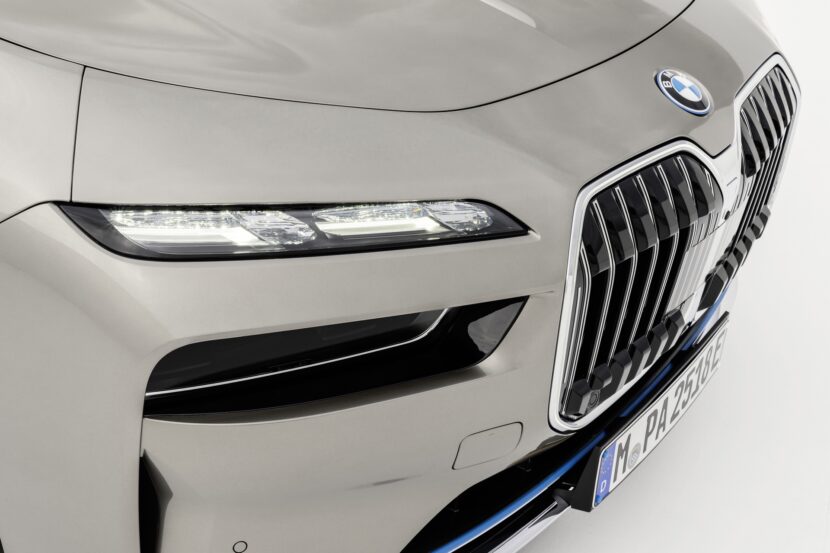 A neat little visual trick up the i7’s sleeve is its LED-lit grille trim. Rather than the X7 and X6’s kind of kidney grille cascading lighting effect, the i7 actually lights up the grille trim and it’s much more visually interesting than the grille lighting of the aforementioned cars.

Split headlights do exactly what they say they do on the box – splitting the lighting work. The upper part of each headlight is responsible for the daytime running lights and the indicators, but has also been designed to represent BMW’s characteristic dual light effect. Underneath, the lower part is responsible for the driving and driving lights but is also tinted, so as to somehow hide in the background until needed. 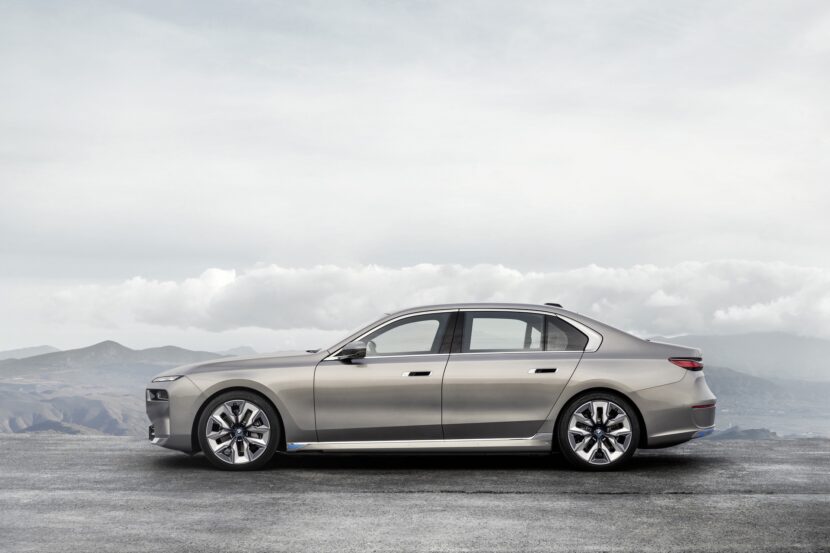 Along the sides of the car, flush door handles, aero wheels and honest Hofmeister Kinks flank the BMW i7. It also has sophisticated Rolls-Royce-style automatic doors, which open and close at the push of a button. These aero wheels are big too, sitting at 19″ as standard, with 20″ and 21″ wheel options, including M Performance wheels.

However, it’s inside the i7 that gets really interesting. Again, just as with the exterior, BMW didn’t want customers to have to sacrifice interior luxury or comfort when choosing either the gasoline-powered 7 Series or the all-electric i7. The cabins are therefore almost identical. But that’s not a bad thing.

Front passengers are treated to an all-new dashboard layout that includes crystal-like illuminated trim, dubbed the “interaction bar,” which can change color and is one of the most unique features of any interior. BMW of history. Not only can the driver customize their color scheme, but they can also choose how they react to certain events, such as phone calls or welcome/goodbye effects. 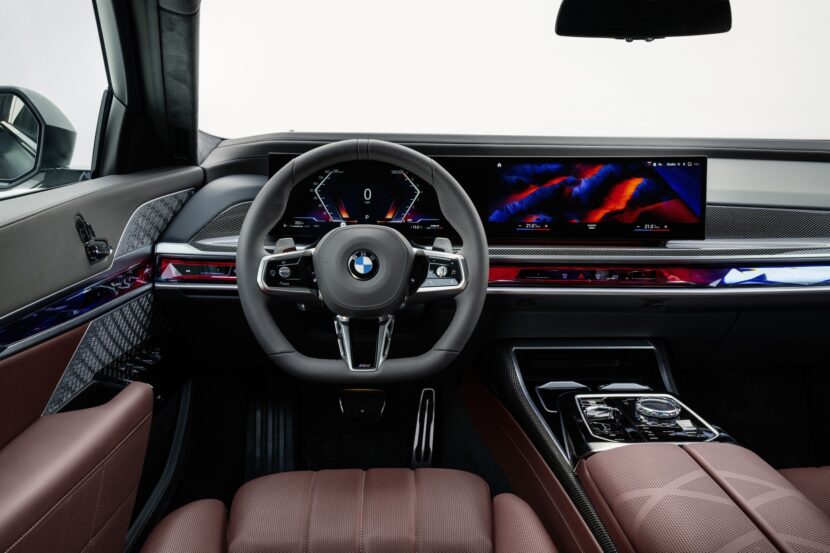 Just like the BMW iX, the i7 also gets a two-spoke steering wheel, but this time it’s not hexagonal and has a flat bottom. Just like the iX, the center console features a rocker-switch gear selector and the same set of buttons and rotary dial. In front of this small cluster of buttons and switches are two cupholders, which are individually covered. It is an unusual design; not a bad or a good one, just very different; but it looks interesting and each cup holder is both heated and cooled.

Managing all the technology up front is BMW’s iDrive 8. It’s the exact same system found in the BMW iX and X7 LCI, meaning the i7 gets the same new infotainment system and digital driver display screen, both hip-mounted. 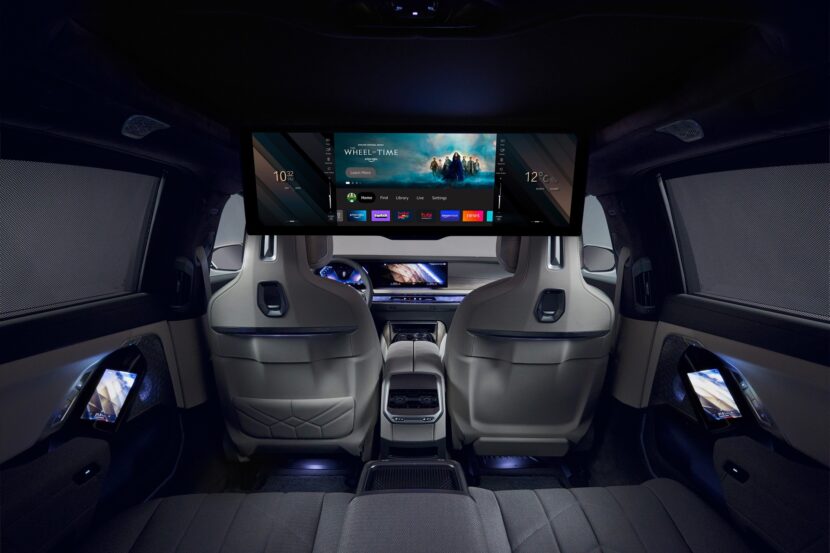 Move backwards and the technology multiplies. Rather than a single screen, passengers have up to three, one of which is optional and larger than all the other BMW i7 screens combined. In a standard BMW i7 rear seat, there are two screens, one in each of the rear door panels, located just in front of the armrest. These screens control everything the rear passengers could want; ambient lighting, air conditioning, sun visors and sunroof. Everything that can be controlled is controlled by said screens.

However, if you add the Theater Screen option, you get a massive 31″ 8k widescreen that folds down from the car’s headliner for a literal theater-like effect. It incorporates Amazon Fire TV, which allows passengers to watch any type of streaming content they can imagine, via the car’s own 5G data connection. Being Fire TV based, data from your Amazon Fire TV home app is transferred to the car, so if you’re watching a movie at home, take a break at any time and get in the car, the movie will resume from the same place in the back of your i7.

When using the movie screen, rear passengers can listen to their movies or shows through the all-new available 36-speaker, 1,965-watt Bowers & Wilkins Diamond Surround sound system with 4D audio that uses exciters in the front and rear seats. If you don’t specify that option, you’re still getting a Bowers & Wilkins system, but it’s 18 speakers and 655 watts. Or, rear passengers can use Bluetooth headphones to listen in, if they choose to do so privately.

Using that same data connection, the BMW i7 – and the entire 7 Series range – can become a device on your T-Mobile service plan. Which means if you connect your car to your plan and your phone dies or breaks down, you can just make calls and text with your i7. It’s like having a car phone again, only better. 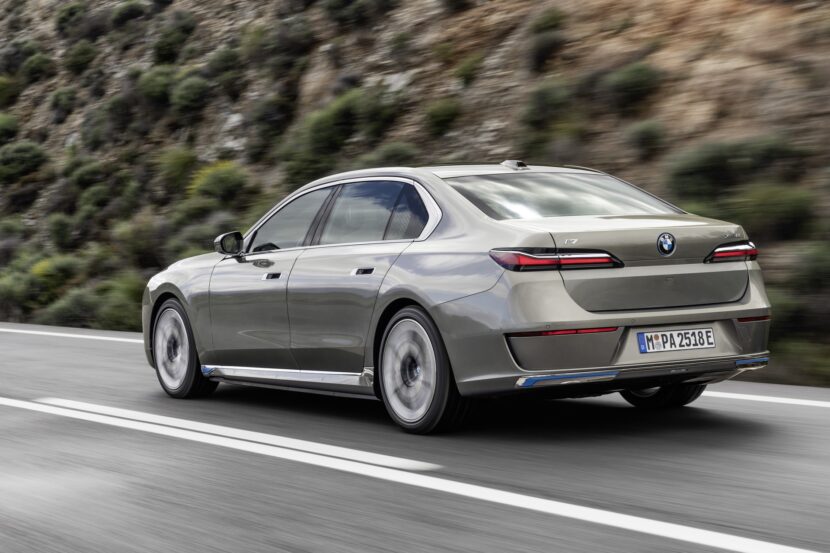 Unfortunately for you tech haters, power lovers and old-school car enthusiasts, tech and speed are one and the same in the i7. The BMW i7 xDrive60 is powered by two electric motors, made without any rare-earth materials. Peak output is 536 horsepower and 549 lb-ft of torque, which ironically (or not so ironically) gives it the same output as the BMW 760i. According to BMW, 0-60mph occurs in 4.5 seconds and the i7 has a top speed of 149mph.

Those two electric motors, which provide torque-vectoring all-wheel drive, draw their power from a 101.7kWh (usable) battery pack, which is said to be capable of a range of up to 300 miles. This range figure is a figure estimated by BMW, based on EPA testing procedures. 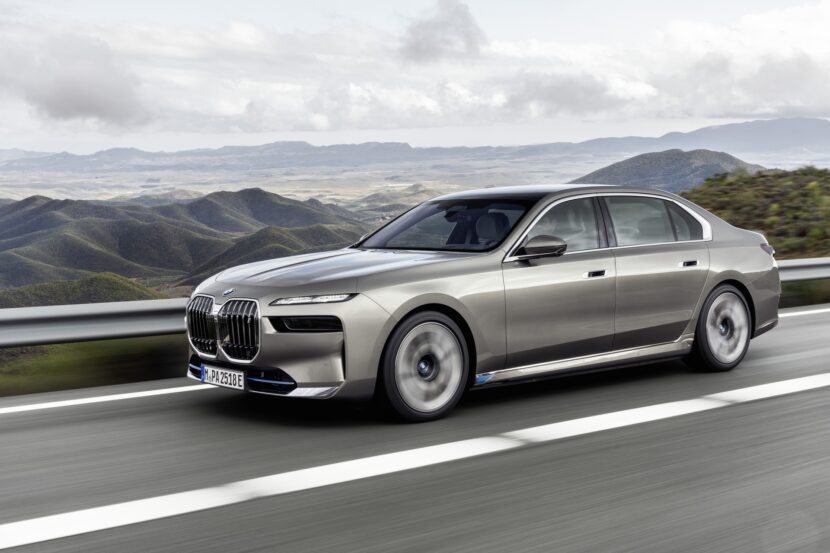 Charging the BMW i7 is similar to charging the BMW iX. It can be charged at 11 kW AC or up to 195 kW on a DC fast charger. However, what differentiates the i7 from its big brother is its flatter charging curve. Due to improved cooling and software efficiency, the BMW i7 can charge at 195kW longer than the iX, allowing it to claw back 80 miles in just ten minutes. BMW has also partnered with Electrify America, to provide all i7 customers with three years of unlimited 30-minute fast-charging sessions, enough to nearly recharge the battery. 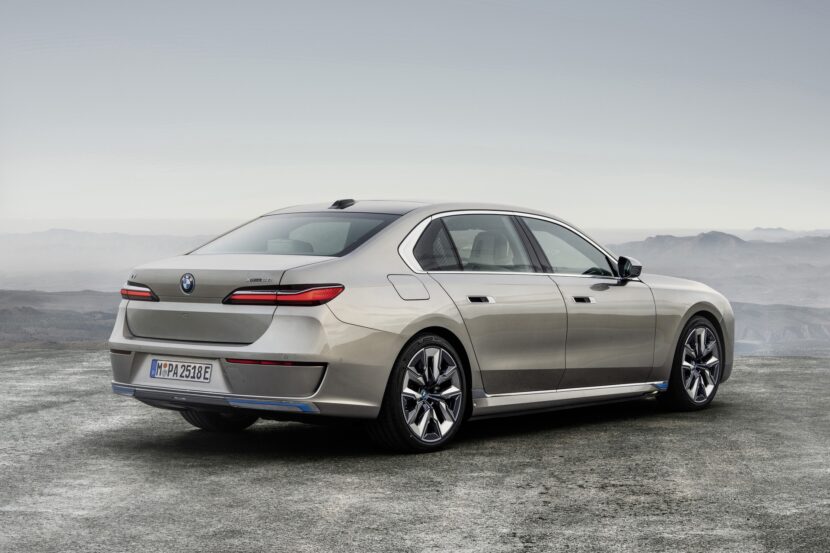 Without a doubt, the BMW i7 is the most advanced flagship vehicle the brand has ever produced. It takes the 7 Series’ claim of being the most luxurious BMW ever and adds to it, by having the most high-tech powertrain of them all. When 7 Series customers walk into dealerships, they’ll have the choice of getting a car that looks and feels exactly like the standard 7 Series, just with a quieter, smoother and more polar bear-friendly powertrain.

2022-04-20
Previous Post: Hyundai Staria Lounge Limousine is a chic minivan with a high roof and a 25-inch screen
Next Post: Presentation of the new BMW 7 Series and i7 electric limousines